ChaulaTV in Latvia is an unusual youth channel. Not just is the content aimed at young people but it is produced by them, in a studio and on location, with high school students supported by media professionals. The channel has now implemented a production workflow system based on Cinegy products. Designed and installed by Cinegy’s Latvian distributor VESet, the system includes virtualised ingest, archive, editing and playout tools. By putting the processing in the cloud, it means that all the production and post production processes can be carried out through web tools from any location, most importantly from the students’ own homes. “This service allows you to have your own TV channel that can be broadcast to any content delivery networks,” explained Gatis Galis of VESet. “You do not need any long-term investments in infrastructure: the solution is built upon Microsoft Windows and Microsoft SQL server, and the media asset management, post production and broadcast automation is provided by Cinegy.” An essential part of ChaulaTV’s output is to broadcast live from the studio in the morning and ingest the same video feed into the Cinegy Archive. Ingested material is then used to prepare their afternoon programmes. Based on standard hardware and IT infrastructure, Cinegy Workflow is a modular, open platform consisting of a suite of tools, applications and open APIs for television production without being tied to a particular vendor’s proprietary solution. It also integrates fully with traditional production and post production processes, including non-linear editing systems. “Together with VESet cloud, Cinegy has allowed us to build our live HD broadcast channel without up-front investment in server infrastructure and licenses,” said Janis Vaisla of ChaulaTV. 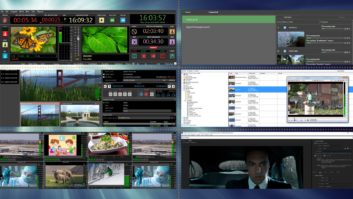