The news from Meduza Systems is that the order book is open with first delivery of the 3D 4K camera due in November. The company also spies live sports broadcast as a key application.

“We came away from NAB with 70 active enquires, since then we’ve had another 70 and following IBC we have so much interest that we are going to prioritise potential customers,” said CEO Chris Cary.
Two units are currently out with cinematographers for test and two others are about to be built and made available for rental.
“Sports is a key market,” said Cary. “The camera weighs just 13lb with full convergence, motorized iris and focus – all in one tiny box and takes 10 minutes to set up.
“We want to get it on a golf course. The camera can be configured according to the electronics in the head. So we can configure a 1080, 180fps version, for example, with output via HDSDI or fibre just as easily as a head that can shoot 4K. We also are proposing to develop a wireless system.”
“It’s clear that rigs have a limited lifespan,” Cary added. “Today’s S3D rigs are great cousins of the ones invented in 1905. The industry needs to move on and find the next generation which in our view is portable, high resolution, truely flexible systems.”
“If you have a camera this size you can mount it with any other 2D cameras in the field using the same operator and same framed shot and simply extract the 3D or 2D feeds in the truck.”
I conducted a straw poll of potential candidates for the camera at IBC and found the concept considered to be like Marmite – you either love it or hate it.
Much will depend on the experience that cinematographers and rental firms have when they get their hands on a unit.Accessories to the camera now include a 16 piece optical set of matched Delta 4K S3D lenses (pictured).

They have been designed specifically to accommodate motorised focus and iris controls. The iris and focus rings, which float on a set of 50 micro ball bearings, will be supported by the forthcoming Preston 3D controller.
According to Meduza: “The lenses of the series are not only uniquely optically matched and sold in pairs, but each lens has been constructed to fit into a compact 38mm wide mechanical barrel to allow for very close inter-axial positioning that is critical to S3D.”
“Quality S3D images are the product of many elements of precise control working together,” says Meduza Systems’ COO Jon Kitzen, “and optical precision is one of the most vital, especially working in 4K. All of the standards being set for cinema and television alike are reaching out for a level of optical excellence for which 2D lenses and lens mounts trying to work in tandem were never intended.” 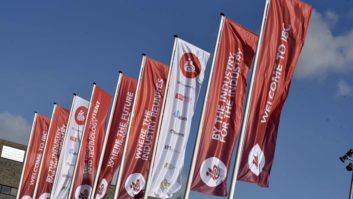