IBC is playing host to the worldwide launch of the RMio64-D rack unit, for Dante/MADI conversion in broadcast and live sound application.

The 1U high RMio64-D allows audio from a CL/QL live sound (or other Dante-equipped) system, to be converted to MADI and fed to an OB vehicle or other recording facility. Alternatively, it can allow a MADI-based console to be easily integrated into a Nuage system for post production.

The unit marks the third chapter of Yamaha’s Dante R-series i/o units. Yamaha’s Rio3224-D and Rio1608-D i/o units were launched with the CL series digital mixing consoles in 2012, followed in 2013 by the Ri8-D and Ro8-D for Dante-based audio systems.

Word clock synchronisation can be an issue when converting between different audio formats, but the inputs and outputs of the RMio64-D feature built-in sample rate conversion, meaning sources with differing word clocks can be connected without causing noise or dropouts. In addition to redundant Dante network connections, the RMio64-D supports MADI redundancy through simultaneous coaxial and optical connections. There’s also MADI Split (loopback) capability, where a signal received at either the coaxial or optical input can be also retransmitted to the other output.

The Rmio64-D can be mounted using the CL/QL console touchscreen displays, with convenient remote control of Dante patching and sample rate converter settings; Yamaha said support for the latter is planned for a future update.
Precision synchronisation with Nuage system Direct Monitoring and VST System Link functions is also provided, as well as remote control from the Nuage Workgroup Manager software.

“The RMio64-D allows built-in sample rate conversion to effectively overcome word clock synchronisation issues that would otherwise limit the choices in system design,” said Nils-Peter Keller, marketing director at Yamaha Pro Music and Pro Audio. “Extensive compatibility with CL/QL series consoles and Nuage systems significantly enhances the value of those products for use in a wide range of situations.” 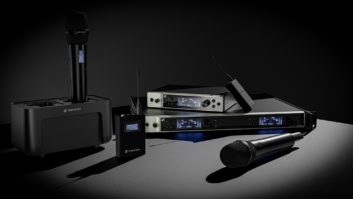